Where are the Marches exactly, Shropshire, Herefordshire, Powys?

Exactly where are the Marches?  A question posed by a Worcestershire based company, @SBPrintWorcs  at #MarchesHour of the 30th of March.  The company was unsure of the area considered to be part of the Marches, hence whether it was allowed to participate in #MarchesHour or not.  Inspired by @SBPrintWorcs’s question, during the same #MarchesHour chat, Maggie David (@mixedupmaggie1) asked “So here is the question what do you consider to be The Marches”

The question as to where to consider part of the Marches was debated, when #MarchesHour was created.  A neat, tidy satisfactory answer that could help us draw a circle around an area on a map, and call it the Marches was not possible. Given that the Marches seem quite difficult to pin down, what follows is an attempt at defining the Marches;

Are the Marches Welsh or English?
In order to define the Marches, perhaps we should first differentiate between the Welsh and the English Marches.  This is quite easy to achieve. There is no such thing as English Marches, which left us with the notion that the Marches are Welsh. So, let’s have a go at identifying the Welsh Marches.  An entry in Wikipedia for  Welsh Marches defined it as “ an imprecisely defined area along and around the border between England and Wales”. This fuzzy definition only highlighted the difficulties we had, when trying to define the Marches for #MarchesHour.

Brief research into how and when the term and area referred to as the Marches came to be said: “The English term Welsh March was originally used in the Middle Ages to denote a more precisely defined territory: the marches between England and the Principality of Wales, in which Marcher lords had specific rights, exercised to some extent independently of the king of England”.

Coming back to the present day, where exactly are the Marches? Still using the same Wikipedia source “There is no modern legal or official definition of the extent of the Welsh Marches. However, it is a term still commonly used to describe, in particular, those parts of the English counties which lie along the border with Wales, particularly Shropshire and Herefordshire.”
There you have it!  Herefordshire & Shropshire seem to be the two counties at the heart of the Marches. At #MarchesHour however, we are very happy to welcome counties neighbouring the two counties of the Marches on both sides of the border.

Towns & City in the Marches county of Shropshire

Towns & City in the Marches county of Herefordshire 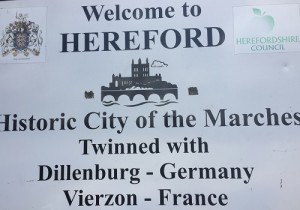 Hereford – City of the Marches

Other stuff defined by the Marches

The Marches Way is a long distance footpath which connects Chester in the north, via Whitchurch, Shrewsbury, Leominster, and Abergavenny to Cardiff in South Wales.
The Welsh Marches Line is a railway line from Newport in South Wales to Shrewsbury, via Abergavenny, Hereford, and Craven Arms.